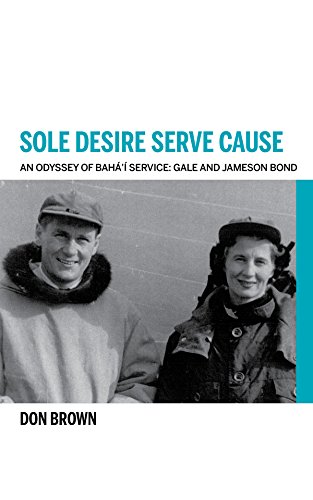 Memoirs of Jameson and Gale Bond, Knights of Bahá’u’lláh to Franklin in the Canadian Arctic
Our hope is that our lives are a reflection, however imperfect, of the Divine Will. Our hope has been to show forth an attempt to win the good pleasure of the Beloved. And it is our hope that the reader will understand how inseparable they are and will see through our personal frailties to something infinitely more beautiful. Our lives are blessed and full of bounties . . . Jameson and Gale Bond, 2001
Jameson and Gale Bond’s memoirs tell the story of their six decades of Bahá’í service, particularly as Knights of Bahá’u’lláh in the Canadian District of Franklin above the Arctic Circle. Shoghi Effendi realized that among the goals of the Ten Year Crusade, ‘the objectives of the far north are perhaps the hardest. On the other hand, the harder the task, the more glorious the victory. You may be sure that he is praying for your success ...’
The Ten Year Crusade’s ‘driving force’ was described by Shoghi Effendi as ‘the energizing influence generated by the Revelation heralded by the Báb and proclaimed by Bahá’u’lláh’.  In Jamie’s opinion, this same force could well have been the catalyst for advancements in society such as the introduction and accelerated development of health services and education in the Canadian Arctic; the first extensions into the Arctic of the Canadian judicial system; and the first ballot boxes that gave Eskimos a voice in the political mosaic – all of which occurred during the Ten Year Crusade.
During the ten years they spent in the District of Franklin, Gale and Jamie never had a Bahá’í visitor. But the Arctic regions, and especially the indigenous peoples of the Arctic Archipelago, were always in their hearts and minds even after they left in 1963. Their services in later years, particularly Jamie’s services on Bahá’í institutions and in international forums, and Gale’s journeys to her native Hungary to help establish Bahá’í communities there, are recounted in the last three chapters.